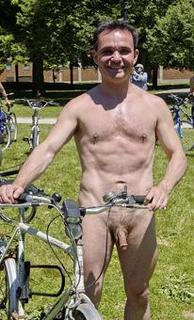 Howdy folks. I've set up this blog in order to publish pictures and stories about naked events I have attended in various places around the world. This is intended as an adjunct to my main naked websites:

My name is Spike, though my Mum calls me David. Spike is a nickname I've had since the early 80s. At my first GNI Gathering (Gay Naturists International), back in 1992, there were over 600 men attending, and there were 43 Davids. That's why I always use Spike in a naked context; after all, if people are talking about me behind my back, I want to make certain they both know whom they are talking about! :-)

I'm a gay nudist living in Toronto. I've got two lovely naked boyfriends, and we like to travel, especially if we can do it naked!